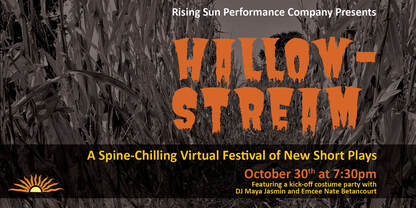 I wrote a 10-minute zoom play as part of a 48-hour writing challenge that will premiere in HallowStream with Rising Sun Theatre Company on October 30th. More info & tickets here.

I move from Colorado to Paris, France to begin a new teaching contract.

More Projects in Development:
Ribbon (Feature)
The Name of Her is Grace (Feature/MiniSeries)
Innards (Feature)
She, They, God (Full-Length Play)

​​High (Pilot) - script & TV Bible - is in festival submissions and available to read upon request.
Clatterz on Highwayz (Short Film) in pre-production. Follow @clatterz_film on Instagram for more.

Currently based in Paris.

Moved back from China to Colorado.
(Lived and worked in Ningbo, September 2018 - December 2019)

September 2019
High screens with The Emerging Filmmaker's Project in Denver

​April 2019
A new excerpt of She, They, God presented with Sacred Circle Theatre Company at MayDay Space in Bushwick, Brooklyn.

​February 2019
Tenny screens with the EFPalooza film festival in Denver

Fall 2018
Moved to Ningbo, China for a 15-month contract with EF English First
Narrated, Saved (One-Act) and an excerpt from She, They, God (Full-Length) presented with Sacred Circle Theatre Company

*I traveled to Avignon, Edinburgh, and Moscow to create a database of "International Theatre" where I attended theatre festivals, wrote about performances, and interviewed artists. My work is published with SMU Engaged Learning.